December 2012 saw the final release of Slax 7.0 after more than three years without an update, quickly followed by several bug-fix point releases. In 7.0.3 the ability to act as PXE server was re-introduced, which had been present in earlier versions but was missing from the early 7.0 branch. I tried it in VMware Player, VirtualBox, from Live CD as intended and installed to external USB connected to an Acer 5551 laptop with ATI graphics, 4 GB Ram and a Phenom II X3 processor.

For those that don't know, Slax is a live system built on Slackware which can load modules on-the-fly. When activated, they extract into their own file system and present as separate hard drive partitions. Modules now have the .sb extension and can be built from a wide variety of sources including converting Slackware packages, and I believe Slax 7 is compatible with using packages for Slackware 14.0. The system can also use and convert Debian packages, but for your convenience many modules are already readily provided. The developer Tomas Matejicek has added a new module section reminiscent to the one for earlier versions and this is slowly getting more populated. The old site with modules for version 6 is also still accessible under http://old.slax.org/ and offers a richer collection, understandable as it has been around for years. Hopefully the new Slax will reach this level of support, although some packages do not need to be added any more. 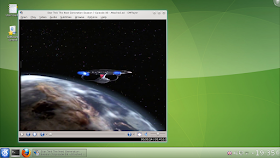 For example, Slax now has full multimedia support and plays music and movie files as well as Adobe Flash. I was able to play movies from my video collection on the internal drive straight away and to watch a news stream delivered in flash format. 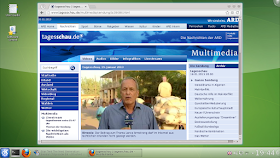 Broadcom 43225 wireless against all my expectations did not work out of the proverbial box. It turned out that a manual (if you don't have wired access at that time) install of the kernel-firmware package remedied that small problem, so keep another working system handy if you're starting fresh and don't know for sure if your wifi chip is supported or download it beforehand.

The default desktop presents with a somewhat Minty feel now, a green wallpaper with Tux in the middle. Unsurprisingly Slax continues to use KDE as its main desktop environment and has finally also made the jump to KDE 4. Along the way this small live system has also picked up a corporate sponsor and the latest offering is largely due to that influx of money, so I'ld wager not much chance of getting that default changed.

With a slimmed down but still highly functional KDE the system still comes in as an under 220 MB download, usually between 214 and 217 MB depending on the language pack used. That's right, Slax now offers separate downloads not only for 32-bit and 64-bit and for USB/Flash drives but also for all supported languages, and there are a lot of them. Only some East Asian languages are slightly larger than the target. This is great news and definitely a step up from version 6 where this sort of customization would have been up to the end user. 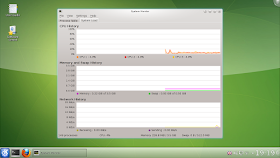 Processor usage straight after boot was normal for an idling system and memory usage stayed at around 222-226 MB which seems extremely good for KDE 4. Slax achieves its small size and usage by stripping out the Nepomuk and Akonadi services and by not including the KDE Pim suite, only the desktop framework and a couple of select applications like SMPlayer for multimedia. As some users have noted in the Distrowatch weekly comments, this unfortunately also stripped out the K3b burning software which is regarded as one of the best for the job and this may make Slax less useful to some. In another surprise the GTK application Pidgin is included for IM/messaging instead of a native KDE one. 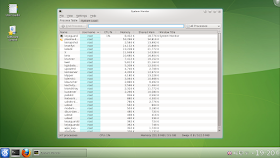 A user guide has been added to the desktop which details how to do just about anything with Slax, such as loading additional modules or installing to a partition. Slax 7.0 exhibits polish in this regard not evident before, which may come from the fact that the developer can now fully dedicate to it. Documentation extends to the main site and to the blog section and between all these the competent Linux user should find all his questions answered.

To keep the size to a minimum the default download does not include any other wallpapers, but this is of course easy to rectify with the built in functionality of the control center to connect to Kde-look.org where you can get some nice Slackware themed ones for instance.
Multimedia and Fn keys were detected properly and worked without further fiddling as visible in the below screenshot. Suspend to ram and resume itself generally worked outside the virtual machines, but may be related to problems addressed further down. 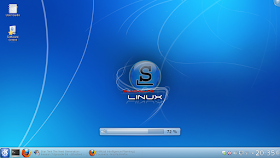 Unfortunately, I also ran into some problems with Slax. Numero Uno, the four leaf clover that is the Slax logo still showed purple during boot up on my ATI Radeon Mobility HD 4200 chip (jeez, what a model description) in 7.0.4. The software center was still not populated at the time of testing safe for two packages, which only left the option to go to the website and download manually from the modules page, not that there's anything wrong with that. It appears though that this may have changed with the release of Slax 7.0.5 today. 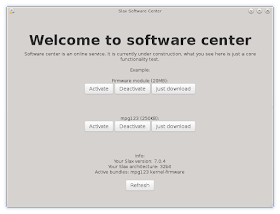 The biggest problem I ran into repeatedly was that in all tested environments the file manager and applications did at some point not start anymore, sometimes, but not always, apparently related to coming back up from sleep mode.
This manifested with the error message "The process for the file protocol died unexpectedly" and the file system not being writable. Even Firefox, not part of KDE, did not start any more. Obviously this represents a huge problem as many people will want to run Slax from an external device and this behavior may not be limited only to coming back from suspending to ram. In fact I seem to recall encountering a similar problem with 7.0.1 but attributed this to the system possibly running out of memory because I had it running in Virtualbox with 'only' 512 MB allocated.

Slax 7.0 is a great update for people like me who are slowly getting tired of constant installs and setting up the box and who just want something small that covers the basics and works, possibly with the exception of having to add one package. It's truly versatile as it can easily be run live from optical media or installed to hard disk/SDD with a simple extract and running of one command to install the boot loader and can then be extended from there with additional modules and used with persistency settings. Security implications of running as root aside, this is a great tool for fixing other installations without jumping through hoops, a quick browse on the go or even the casual home use. This is a minimal system with no running servers, not offering any attack vectors.

At the moment Slax is updated rather often and is still subject to change, and as it seems not quite mature yet and new features are still being added it may be better to use an older, more stable version if you don't need the newer kernels and hardware support. I still find the Community Remix version 0.9 that was based off Slax 6.1.2 and which I keep on one USB stick more reliable and at the same time closer to the original Slax than the later Porteus releases who integrated a user account. But at least now you have the choice!
barnabyh at 23:06
Share
‹
›
Home
View web version