So you want to be a Slackbanger. Here I'm going to share my tips how to convert the latest release of Slackware into ArchBang 2010.09 inspired SlackBang (The wallpaper in the first screenie is lifted from it). Btw, SlackBang will soon have its own site.

This post, From ArchBang to SlackBang, has probably all you need for now. Adding LXDE is also not a bad option since we're already using some of its tools like LXappearance and possibly the PCMan file manager, if you're not opting for Thunar, EmelFM which are also very decent choices, or whatever else takes your fancy. Tip: Consider which ones will allow you to (auto)mount removable drives and external media and map network drives if that is in any way important for your daily use.

As far as I can see today, 10/09/2016, the above post referenced is still valid. There is still a case for rolling your own SlackBang, even though the distrosphere and GNU/Linux itself has obviously changed quite a bit since 2012. Slackware itself though hasn't much, although it now includes Pulseaudio.

For one, Archbang and most Debian derivatives have moved to the systemd startup/init system and the daddy of this type of setup, #! Crunchbang #!, has been discontinued. I recommend looking at BunsenLabs and Crunchbang++ as sort of inofficial successors to the original project to get ideas from and lift scripts, icons, gtk themes and pipemenus, as well as scouring the old #! repos if still online by the time you read this. The tint2restart script as well as the one to restart conky are pretty neat, and you can just drop them into the /usr/bin or /home/username/bin folder instead of installing a package. Simple. Zephyr Linux is based on Devuan and is using the traditional init system and it offers variations with Openbox as well as Fluxbox window managers. But it gives you a pretty basic setup without the scripts and UI refinements that made Crunchbang what it was while still remaining simple enough.

Anyway, these are all based on Debian, and if you're fond of Slackware you probably want a Slackware base. Slackel might be a choice to start off with, yet it is based on Salix as well as Slackware, includes some utilities as well as artwork out of the box the vanilla Slackware fan might not care for, and although it is using Openbox is quite different in its design and is lacking the sleek look of the !bang. So get yourself a Slackware DVD and follow the guide above. Media are available here. If you want the typical silver-grey Crunchbang look, get the CB 11 'Waldorf' or Bunsenlabs icon and gtk theme from their repos and extract them from the .deb package if you haven't already got an install to export them from. You might also want the grey tiles for a background.

Bearing in mind, if the Slackware way of doing things appeals to you then the Crux based Kwort might also make a good choice. It already comes with the Tint2 panel, should be just as easily configured and looks like it got most things already in place whilst still giving us a bare enough install to shape ourselves.

A few more custom configs with Wbar to top it off: 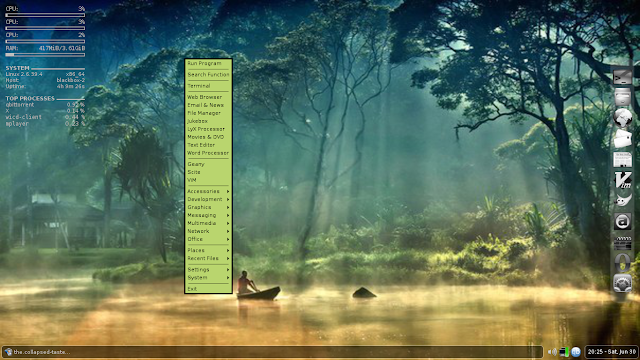 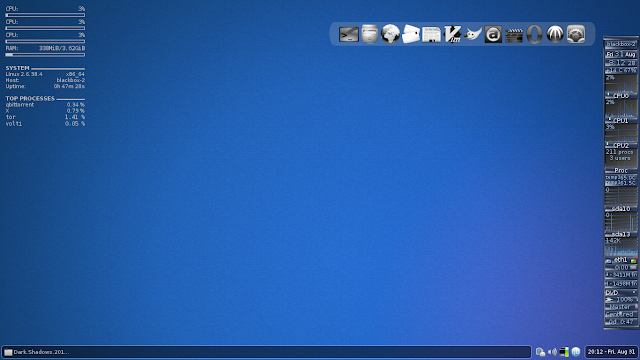 If you're looking for LXDE and LXQT packages for Slackware find them here. Or build them yourself directly from SlackBuilds.org.