If you looked at the ArchBang website over the last few days you would have read that founder WillXtreme is retiring from the project leadership due to changes in real life and other pursuits. A few people also involved in the development and who were quite active in the forum for example and with tips on their own blogs, like pablokal, will continue the project.

ArchBang is great, I've been running it as my main OS from September 2010 to January this year and that is not bad considering all the options out there. The only reason I decided to wipe it was that, being a rolling release distribution, it got quite bloated with the transition from gtk2 to gtk3, the move from the 2.6 kernel line to Linux 3.x and so on. Along the way something messed up and memory usage just went through the roof and I decided to wait for a new image.
The ArchBang guys also decided to change their release schedule recently, moving to June and December instead, but rather than upgrading from some old ISO's from last year you can get testing ISO's with a newer kernel and at the same time participate in testing for the upcoming release. I've only been running the x64  from CD but it all seemed to work and I did not run into any issues in an admittedly rather brief session.
[Edit: Two days later ArchBang 2012.05 was released, with yet another change in release schedule to now four times a year.] 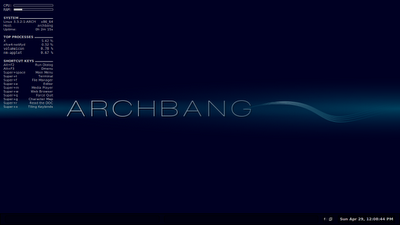 Look and boot screen are still using the previous release's artwork, and the overall layout and design once logged in hasn't changed. The Openbox application menu shows icons by default, not what I would call simple and lean but a matter of taste. The current ISO is dated 16-04-12 and comes in at 491MB. It comes with a 3.3.2 kernel and only used a respectable 100MB Ram after initial boot, down considerably from almost 200MB when I first tried it. It's still a great option to get Arch Linux with full X onto your machine though, or as a fully functional yet minimal Arch Live CD with GUI.

A full Slackware with XFCE install was already on another partition, and presently it seems like a better option to have a stable system that rarely if ever changes on this laptop. It's a choice between a couple of security updates vs. 100's of megs of updates every few weeks that often affect the entire system.
So I set out to re-create my previous ArchBang installation as closely as possible on Slackware 13.37. One thing I'm missing is that you cannot set hooks like in Arch that automatically rebuild the Fglrx module when the driver was updated, but such is life when deciding to go with one over the other. Here's the result. 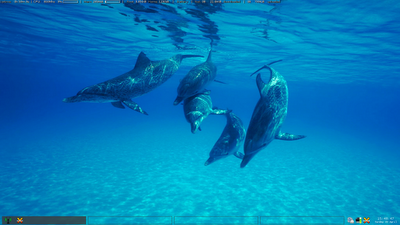 All you need to do is install some packages from SlackBuilds.org, like the Nitrogen wallpaper manager and the Tint2 panel, and of course Openbox, the Openbox configuration manager and several tools which I already had from adding LXDE previously, like LXappearance, LXinput and PCManfm, but feel free to choose a different file manager.
It's a good idea to copy over the Openbox menu from ArchBang, also copy the pipemenus folder from .config/openbox/ for quick access to your home directory from the menu, and place xcompmgr.sh into the scripts folder, create one of it does not exist. Install scrot on your Slack box if you haven't yet to make use of the screenshot subentry in the Openbox menu you copied over, and gmrun for the run command at the top. Adjust menu.xml to your liking if you want to use a different browser, or delete/add entries as necessary.

The Exit command in the menu copied over did not work for me in Slackware, so replace it with openbox --exit. Finally, install Conky and use your favorite .conkyrc config with it which is placed directly in the home directory. Again, you can copy one from ArchBang, or have a look at the many configurations on the net. A good place to start is the friendly CrunchBang forum, the distribution that made this kind of look and simple configuration and I believe the Openbox window manager a lot more popular in the process. Take a look at the resources here and in particular the results of a quick search of the forum here if you're new to Conky. Mine is just a line at the top of the desktop with the most important information.

You'll also need to edit your autostart.sh in the .config/openbox/ directory. Slackware does not use Networkmanager yet so that line needs to be commented out. If you've done a more or less full install of Slack, without KDE 4 but with XFCE, and you're running wireless you most likely already have Wicd installed. Add it and the other tools we have installed either manually from SlackBuilds or with Sbopkg (recommended) to start automatically at login. Using the power manager from XFCE allows you to suspend or hibernate. Here's mine:

Using Sbopkg guarantees you're always getting updates to the packages you have installed from SlackBuilds, as long as you synchronize with the repositories (there's a sync option in the main menu). Sbopkg looks exactly like pkgtool, so no learning curve there as long as you can navigate a menu.

Voila, there's your SlackBang. And, in case you're asking, I'm not planning to start a new distribution. No time for that, and it's all quite easy to do yourself thanks to the exemplary work of the ArchBang and CrunchBang folks.
Posted by barnabyh at 17:30