MiyoLinux - A Devuan base to build your own

A couple of weeks ago somebody drew my attention to Miyo (Make it your own) Linux, a small custom base distribution based on Devuan I had not been aware of. Separate builds are produced for the i686 and x86_64 architectures, and one for EFI installations. You can also choose whether to run with a build based on Devuan Testing, i.e. `Beowulf' or Unstable, i.e. 'Ceres' or use the older but stable builds based on Devuan 'Ascii'. MiyoLinux comes with various window managers.

I went for the stable 'Ascii' image dated 20190125 which turned out to use Openbox. Miyo seems to employ i3 most consistently across versions but the latest image from 2020 is also offered in a JWM edition.
The idea is obviously to provide a basic image, but not as basic as a netinstall, that provides a graphical interface to start with and for users to customize their install from there, although one can also happily just run as is with the provided window manager. If looking for Debian with SysV init but with a more fully-fledged desktop environment, this can be installed from the repositories. 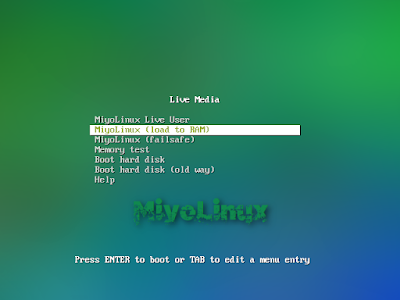 Booting up, there are several options to either go straight into live mode, copy to and run from RAM or to boot an install from hard disk. I found with an SSD the first two are equally fast with such a minimal image to load.

After a short, old fashioned boot sequence (meaning text, not hiding any messages) we are dropped straight into the desktop. The default look reminded a bit of Crunchbang and other minimalist distributions using the Openbox window manager and Tint2 as panel, save the colorful wallpaper. Also like with many of that ilk the desktop is managed by PCManFM and Nitrogen for setting backgrounds. 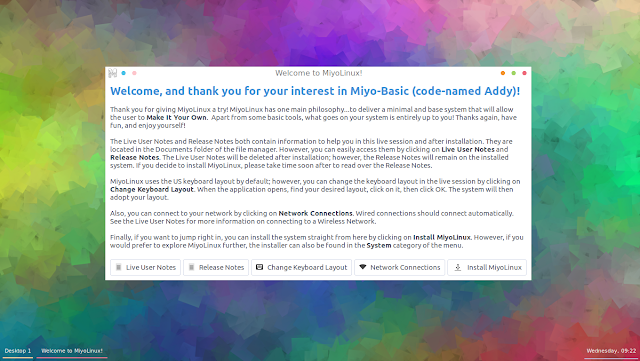 After the automatic login a Welcome screen pops up with important information how to get started. The notes contain information like user name, password and root password, on package management for people who are new to apt-get and Synaptic, shortcuts, connecting to a network and how to install the live system. 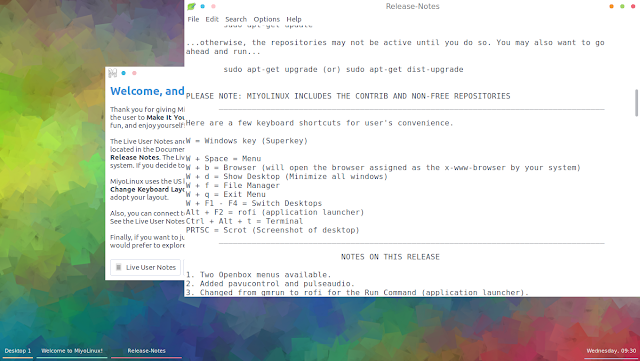 The change keyboard entry actually launches a small application that allows us to select the layout from a list of country flags and the network connections tab links to Connman which is used to manage networks and can be minimized to the tray. The install entry will start the installer without further explanations. Here one can choose whether to use 'su' or 'sudo' to authorize. We need to supply the root password to get started. 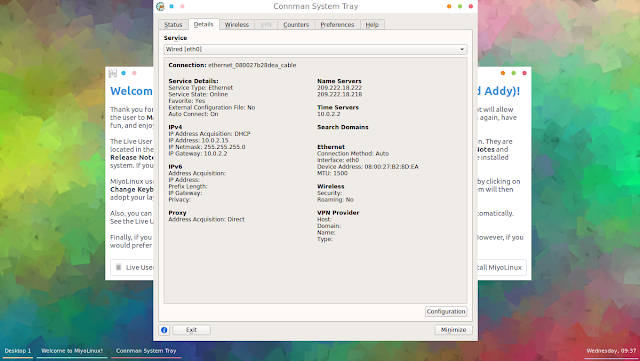 Miyo uses the Refracta installer which presents the user with a list of check boxes to tune the installation. One can create separate home and boot partitions, set a swap partition (as opposed to using a swap file by default), encrypt the home partition and opt to overwrite empty space for security. We can also set it to auto-login if desired. If no partitions are detected the installer offers to run the graphical gparted or cfdisk command line utility. After that we'll be asked to select time zone, make up a user and so on. One can just opt for the pre-set user Miyo if feeling lazy or wanting to stay generic/ anonymous. 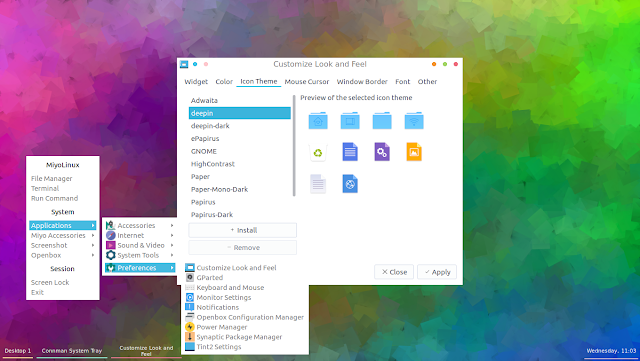 Then it's time for a reboot. Miyo with Openbox is using a bright bluish theme called Vent with Oxygen Norway mouse cursors and the deepin icon theme which is light and attractive, although falling for that curently trendy flat look. A few more Openbox themes are installed and if you like this window manager the only job left is to install a few more programs of your choice and change the look to your tastes. A couple of applications like Synaptic and Gdebi to add software, the Leafpad editor and a terminal are onboard, the Openbox tools to edit menus and for setting preferences and not much else apart from system settings tools. The Xfce power manager was there but no browser or other internet related program.

I managed to install KDE Plasma without any problems to solve. After all, this is Debian/Devuan and everything is just an apt-get away. The only issue was I had to log out before being able to shut down from the login manager but am sure this could easily be solved.
This being 'Ascii' which is based on Debian 9 we get a rather old Plasma desktop 5.8, which is why you'ld probably go for a newer release even if he underlying Devuan 3 'Beowulf' has not been declared officially stable yet.

An update-manager is provided in the download directory but is not part of the stock image. There are several versions to choose from in line with the MiyoLinux philosophy as the readme explains. This means letting the user choose what goes on their system. Read the notes for the subtle differences between the update-notifiers.

The newer JWM image 20201023 is very similar in layout and application selection which makes these spins feel very consistent between editions, but adds Conky for monitoring system information on the desktop.

Miyo runs well from USB. As non-free firmware is included it recognized my Intel wireless adapter and I was able to connect to networks. However this version only ran on my old Dell Latitude E4300 in BIOS mode. CPU on idle was 0.2% with around 206MB of Ram usage with connection manager open after taking screenshots, 150-155Mb after boot with the terminal running top - Htop or another resource monitor is not installed. 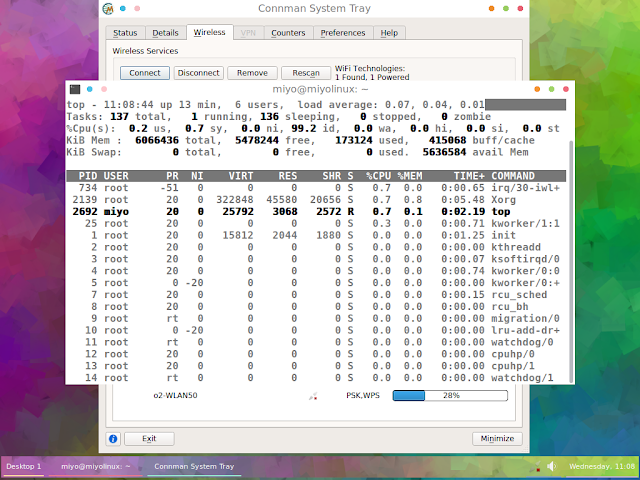 Removeable media were detected and PCManFM offered to open them. I could not find an easy way to enable live persistence. These images appear to be intended as media to perform a full install only and for the live mode to be demo and install mode.

All in all this little project provides a nice sane base to start. Apart from someone who likes any of the default window managers, the MiyoLinux setup and/ or the tools Miyo would be a good fit for someone who wants to customize a Devuan install or wants an easy way to get Debian the way it used to be with SysV init but would like to have X available fom the start and doesn't like Xfce or for whatever reason doesn't want to start with Devuan's defaults.

Some experience with installing a Linux a system, an idea of what applications one wants to add and knowledge how to required.
Posted by barnabyh at 11:19