I haven't upgraded to Slackware 14 yet and in a moment of madness obliterated my old install to start all afresh. That leaves some room to try the new release of Absolute Linux first which of course is based on Slackware. So here we go.

As expected Absolute Linux 14.0 is not radically different from 13.1, details of which you can read here. Besides the usual package updates that Slackware itself has undergone as well there isn't a lot to tell on the surface. Underneath Slackware is now using kmod to load modules but that is pretty irrelevant to the desktop user experience. Absolute is still centered around IceWM which is why it was tailored in the first place but also offers Fluxbox as another light weight alternative. It is still 32-bit for the i686 architecture only, in keeping with its target market of older but not too old PC's, i.e. no 486 processors any longer. It is fully compatible with SlackBuilds and Slackware repositories. Like other derivatives it also still uses a slightly modified version of that old ncurses installer, only in gray. 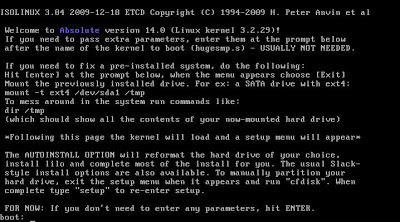 Newbies will appreciate that auto partitioning is now a choice at the beginning of the routine, however advanced users will want to go with their own configuration as the auto function doesn't create any other partitions than root and swap and formats with the ext4 file system by default. 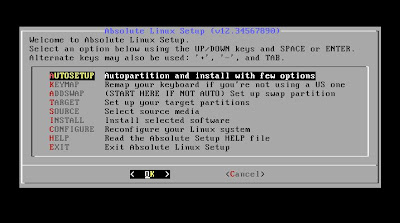 Once the system is installed it's business as usual. Configure your time zone, root password and boot loader and a few other details and it's time to reboot. Absolute does not enforce it but you are prompted to create a restricted user. We're presented with a nice clean IceWM desktop that isn't cluttered with too many icons. Actually, not many are these days, GNOME Shell got rid of them too.

Absolute is now using Networkmanager like its daddy, unfortunately I could not see an easy way to suspend or hibernate by default, so using this light weight Slackware modification on a portable device requires either running a script to hibernate or possibly adding a power manager from Xfce or other. Not very friendly to mobile users though, I would have thought a netbook might be a good use case. Other than that, Google-Chrome is now the default browser for receiving regular updates of the Flash plugin and you receive an assortment of other light but highly subjective selection of software including a multimedia installer and a shortcut in the menu to take screenshots with Viewnoir . The Absolute Control Panel, one of the key factors to distinguish Absolute Linux and make it an easy to manage IceWM desktop, is also still present and has hardly changed. All the more annoying that when I wanted to correct the screen resolution the shortcut for screen settings did not work and presented the error message 'abscreen not installed'. Worse, the desktop settings entry right next to it complained about PCManFM not being installed as the developer has switched to SpaceFM for this release. Let's see if there's an update then, or even install the missing bits.

Refreshing the package list revealed that four updates were available, one of them abscontrolpanel. Yippie! Is it fair to assume this might address the issue and fix which programs are called? Unfortunately I will never find out. Gslapt came up with another error message about missing md5 checksum, and attempting to upgrade from the terminal with slapt-get resulted in a segfault. This is where I called it a day.

Like last time Absolute Linux seems a good idea initially but quickly the lack of attention to detail and polish is revealed. It is disappointing that more than two years later this still has not changed. To get it so wrong in so many instances suggests lack of care and almost no testing at all, otherwise trivial oversights like these would have been picked up. Missing functionality for suspending and hibernating which could have easily been added is another example. Absolute seems like an interesting project but always falls short due to bugs and oversights.

You'll be better off installing Slackware proper and then adding IceWM from SlackBuilds.org if nothing else will do, if you're using this window manager chances are you already know how to configure it to your liking anyway. Absolute Linux is certainly not an easy way into Slackware, rather a buggy one. Not recommended.
Posted by barnabyh at 21:00

New comments are not allowed.