As we all know 'Waldorf' is the testing branch of CrunchBang Linux based on the upcoming Debian 'Wheezy'. Two weeks ago I wrote a shortish post about how the latest testing image failed to install, and promptly an update got released with the release announcement pointing to a known bug in the Debian installer. So, time to try again now that we're back home.

I downloaded the latest testing image 20120927 of the upcoming CrunchBang 11 (direct link to download page here) because I prefer to have newer software on this Acer 5551 laptop that is used for everything including gaming and multimedia, but also because it wouldn't be fair to compare an old stable release with ArchBang which is based on the rolling Arch Linux and by definition much more up to date than even Debian Testing. However, I also downloaded the stable 'Statler' release BPO (updated from backports) of CrunchBang 10. Both are 32-bit this time as I'm hoping to do some gaming in the future if it sticks. The distribution is available as x64 builds as well.

I checked the live session on a Dell Latitude with Intel chip and on the Acer laptop with Broadcom 43225 wireless, and then undertook to install the test build first on the internal hard drive on sda8 and CrunchBang stable on an external USB drive in Icybox. This time I used my trusty Corsair Flash Voyager and unetbootin as I had freshly run out of CD's.

Live session booted up fine and allowed me to actually use the desktop without freezing as soon as something got clicked like in my last test, so I was able to explore the menu a little and check what's running in the system tray by default. What can I say, an improvement already. Immediately obvious was the speedy movement of mouse and cursor and the overall responsive feel of the desktop. Both live images found the surrounding wireless networks on the Dell machine but not on the Acer, which means that the necessary firmware or drivers for Broadcom chips are not on board and need to be installed later. Not entirely unusual, and as I'd done this before when trying out Debian 6 I also knew what packages will be needed once #! is committed to the drive. I have the impression though that many users that are coming to CrunchBang are quite new to Linux and may not necessarily know what's missing. Adding firmware-brcm80211 can not take up much space and I'ld like to see it added to more distributions by default as it seems to be a popular chipset family that is present in many laptops, and surely being outside the big suing entity geographically this shouldn't be a problem?

Great stuff so far. Next was the install routine and this time all went well, after choosing and inputting the usual mumbo jumbo like keyboard layout, timezone, a made up user and an undecipherable password the installer was off to detecting disks and this time after a short burst of activity actually presented me with a nice layout of my partitions. Problem evidently solved, and it seems it was the upstream bug as promised. I specified a separate home partition and that was it, about five minutes later a fresh CrunchBang 11 'Waldorf' image graced the insides of my battered Acer, quite a fast installation. There are some differences between the testing and the stable images, but I'll come to that later. What surprised me is how far the installer has come, it now also offers easy setup of lvm and encryption in graphical mode, although I find the RHEL installer slightly more intuitive and even more streamlined. A nice feature is the integrated screenshot utility that makes saving little snaps of the install routine in CrunchBang easy, but unless with custom or little known installers I try to refrain from posting boring shots of those steps. Grub2 is now the boot manager and detected all my other OS's except Puppy Linux 5.3.3, which is a constant complaint with Grub2.

After booting you will notice what a simple, stylish, fast and complete desktop CrunchBang has to offer, with no superfluous fluff but enough to get started and be productive, most of the time. Due to lacking an Ethernet cable I connected my 3G phone/modem to a USB port, refreshed the package list in Synaptic and pulled in my much needed firmware. A reboot later and a typing of the password and I was on Youtube checking out if Flash worked. It did, and it turned out most codecs are included with GNOME Mplayer, the video application of choice in 'Waldorf'. All my movies and music files played without a hiccup.
I was also most pleased to find that multimedia keys worked, aka Fn + arrow keys for backlight and volume. Time for a screenshot then:

And one with wireless networks detected after firmware was added. Notifications are a bit off if you like your panel at the bottom. 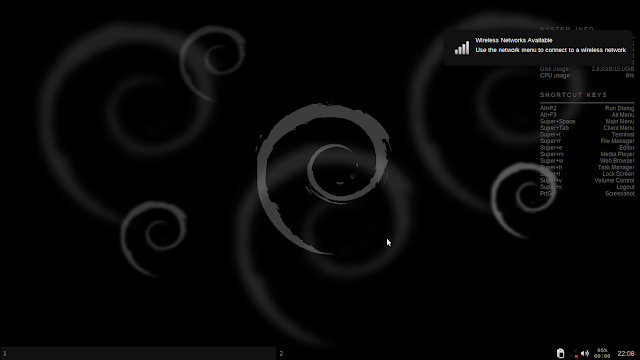 Like its predecessor CrunchBang 11 offers several scripts in the menu to download more software, besides the traditional way with Synaptic or apt-get. Where 10 offered a shortcut to pull Google Chrome from the menu now Chromium and Opera are other options, and another link points to LibreOffice in the repositories if the included Abiword and Gnumeric are not good enough. That it doesn't look as good is no surprise, but the clunky tool bars may turn you off.

There's also another shortcut to Google Docs and one for Dropbox, making the upcoming version slightly more cloud featured. Let's hope it's not going to turn into another Peppermint over time (no offence, there's nothing wrong with Peppermint per se).

Perhaps the biggest difference to stable is the choice of applications and links, and the substitution of GDM2 with SLiM. This may be a consideration if you wish to continue using it as GDM is now deprecated, it had great theming support and many good looking login themes were included with the old release. You may wish to install the stable backports image for newer hardware and selectively upgrade from there. Both images are currently using the 3.2.0 Linux kernel, but only the one in 'Waldorf' comes with pae capability, addressing 4 Gb of Ram and above. Another image for older computers without pae is available on the download page. VLC is the default media player in the older release, which btw also installed well. The only other noticeable difference is the size of the image, which has grown from 667 Mb for 'Statler' BPO to 763 Mb. Where did it all go? 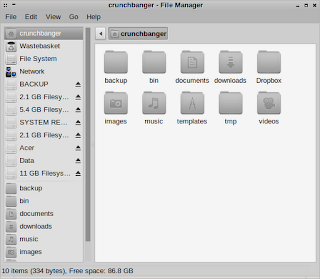 What sets CrunchBang most apart from other efforts or your own customization is the overall complete feeling integration of its unique desktop theme. It's sharp and polished where ArchBang in contrast still presents you with ugly looking raw GTK3 style in those applications. Import a more lively wallpaper and change Openbox and widget themes if you're bored with the color scheme. You may have to change the default color in .conkyrc in your home directory to make it more readable. Online color picker is a good place to start to get your color code, F8F7FC will give you a clean white text. You may also want to change the gap_y value to move Conky up a bit if you moved the panel. 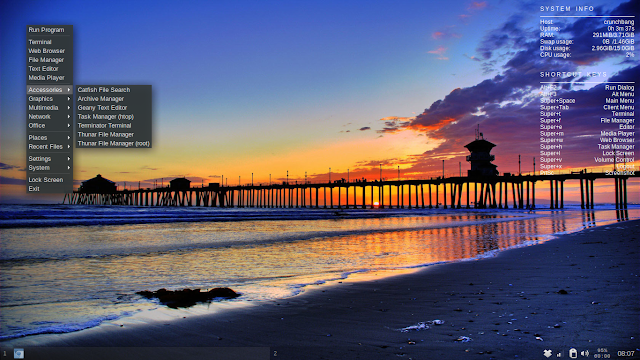 On top of executing the above direct links in the menu I also updated the system with the 43 updates available and installed more packages via Synaptic. I added Pidgin and several plugins to keep in touch with Google contacts, Totem, Audacious, Camorama utilized my webcam just fine. Xchat is already installed.  Dependencies seemed to keep to a minimum and everything installed and executed without any problems.

With the latest iso CrunchBang Linux 11 is shaping up to be a nice release, and one can keep up with relatively fresh but still well tested software from the Debian Testing repositories. Stay on 'Wheezy' to be stable once it goes final or keep rolling on Testing, your choice. In this sense it can be almost as up to date as ArchBang which is designed as a rolling release based on the bleeding edge Arch Linux repositories. Using 'Waldorf' felt incredibly stable and fast and I have no problem recommending it or the stable branch if you're a little more conservative. The community always stress that for important systems one relies in for work only the currently stable release should be used.

By keeping the complicated library dependencies of the KDE and GNOME desktops to a minimum the Openbox window manager come desktop environment (with the help of several other tools like the Tint 2 panel) updates quite easily and usually without breakage, and depending on how much you add it won't shove 100's of Mb down your throat all the time. Chances are the size of updates will be very manageable. ArchBang, CrunchBang, SlackBang, you can't really go wrong whatever your Bang. Simply beautiful.
Posted by barnabyh at 21:03