There are a lot of distributions, spins, customizations and modifications of distributions out there. Not all of them are listed on Distrowatch, such as MiyoLinux I just wrote about a week ago. I once started a series about light weight distributions using window managers such as Openbox and IceWM or lighter desktop environments. Vsido which is utilising Fluxbox certainly fits the bill so let's see.
Vsido first came to my attention on the Crunchbang forum. It is developed by a guy called the VastOne. Instead of the widely popular Openbox window manager it is using Fluxbox and gives the user a basic environment to start with but one that one can already be productive in depending on the needs. This particular modification, I hesitate to call it  a distribution because that is what it's based on, is tracking Debian Sid which means the Unstable development branch of Debian. Nevertheless, if you know anything about Debian and how to succesfully use it, Unstable is a lot more reliable than it sounds. People have tracked it for years without the need to reinstall.
The project's web site states that


VSIDO is built on Debian's latest to date SID kernel. Running FluxBox as the Windows
Manager, any user will find just what they need to be productive out of the box

Armed with Debian packages as it's base, VSIDO is a real rolling release with updates
every two weeks. VSIDO also provides a support forum to assist with any issues

Like the sites of of similar projects the support forum is held in stylish black and seems to function as the main site and front page where user interaction takes place, announcements are made etc. It's a relatively small community judging by the posts but remember, for support the usual Debian channels and wikis are applicable as well.

There are two images of Vsido available on the download page, with and without UEFI support. Both are dated 21 May 2019 which is a bit old by now but then should not pose too much of a problem with a well curated rolling release, in particular if not using any complex software like massive desktop environments that keep changing in style, function, libraries and dependencies. On that front we should be alright with Fluxbox. Only x64 is supported at this point. I opted to download the with UEFI edition which is 2 MB bigger than the image without that support. The download came in at 614.5 MB.

On boot-up we are presented with a menu on black background and the usual options to boot from hard drive, run memtest, boot in text mode or in graphical mode which is the default. This will time out after 20 seconds if no entry is selected and we boot into the default. There is no login menu and we launch straight into the Fluxbox desktop. 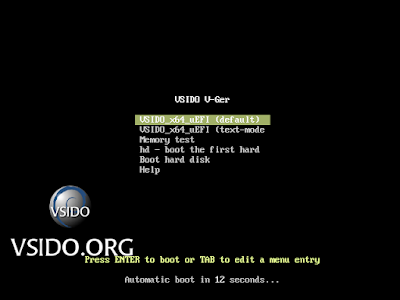 The default desktop is fairly empty and bland but this is by design as this is a spin clearly aimed at the more knowledgeable user who wants to start with a minimal base and furnish it themselves. Virtualbox extensions are not installed. We get a small 800x600 resolution and as there is no tool to configure displays this cannot be adjusted. Vsido uses sudo so we can for example check packages and the number of updates due after install with apt. 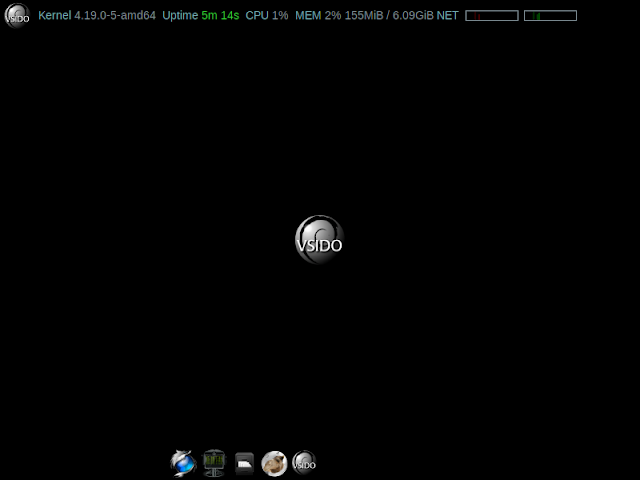 We get a conky one liner at the top providing basic system information in terms of running kernel, uptime, CPU and memory usage and an indicator for net activity. The wallpaper shows off the Vsido logo. At the bottom is a dock with starters for the Firefox browser, the Xfce4 terminal, the file manager (SpaceFM), gMusicbrowser and the Fluxbox menu, which can also be launched with a right click on the desktop and has a smokey transparency to it.

The menu includes an entry for the installer which seems the only way to get this started as there is no launcher on the desktop. The custom installer is a straight forward affair, quite similar to the one in Kanotix, with one exception. If you haven't prepared your drive and created partitions this will go nowhere at the end after answering all these questions. Luckily Gparted is onboard and can be launched from the menu to prepare our choice of storage. Time to get this started then.

If booting in UEFI mode on real hardware the boot menu is actually different to the Virtualbox session. We get a black screen without background and the options to either boot in American English, British English or in Spanish. Other options for nomodeset, loading to ram and memtest are tucked away under Advanced. Running from USB flash the boot sequence is relatively short but not as trimmed down like the one in Crunchbang used to be. 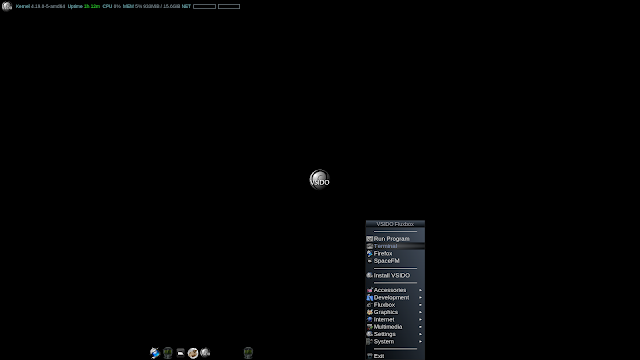 The first thing you'll notice is the odd position of the dock, even more visible than in the smaller resolution, rather towards the bottom left of the monitor.
Looking at the menu in more detail, we get a sparse assortment of programs apart from the main ones linked to in the dock:
The Xfce Appfinder to start with, bleachbit, the bum boot up manager (don't laugh) to configure run levels, medit text editor, several system and resource monitoring tools like the Htop, Hardware Info and the Xfce task-manager, Xarchiver; the Xcalculator; Mirage and a screenshot utility in the Graphics section; Ceni for network connectivity and also entries for network-manager-settings and Firefox; in Multimedia Gmusicbrowser, a Pandora frontend, the Pulseaudio volume control and a text only interface to downlaod and extract videos and audio files. We also get LXappearance to change themes and icons and a zoom utility with a nod to accessibilty but no text-to-speech tool which is a bit inconsistent. While on accessibiliy, the theming is overall high contrast and fonts quite large which aids reading, this was particularly noticeable in SpaceFM and may be something to consider for visually impaired or just older users who want nice looking, large fonts.

Nitrogen is here to manage desktop backgrounds but oddly it is set to the usr/local/bin/images directory which only has icons in it. It seems it would have made more sense to point it at the /home/vsido/images directory. Under System we find already mentioned tools like bleachbit, the terminal and SpaceFM with root access listed plus Gparted, disk manager and the aforementioned bum. Also present is of course the Fluxbox submenu where we can for example change window manager settings and themes, called styles in Fluxbox, change transparency and reload or restart to apply those changes. 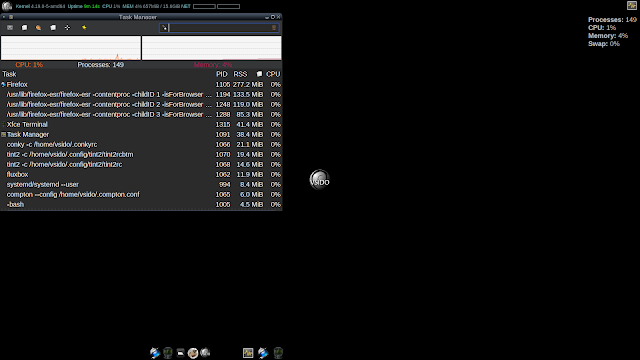 There is no taskbar nor a tray in the traditional sense but we get an indication of running programs with minimized icons in the upper right corner for system monitoring. Minimized programs show on the right side of the dock at the bottom - but still not centred. 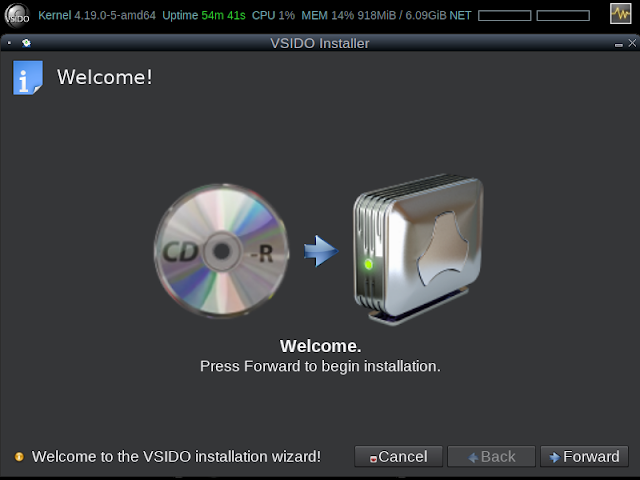 The custom icon theme used in Vsido is LinuxLex-8 which actually looks quite slick and promotes the overall intended dark but glitzy look also evident in the installer. It reminds of the Xquisite icon theme. In general theming is quite 2007 and definitely not in line with the current trend.

The project even provides its own Firefox theming which I thought was very cool and looks good if you like metal, but it's all a matter of taste so as always, YMMV. Adblock is preinstalled as the landing page at first start of Firefox shows.

There is an entry for network-manager in the menu but trying to start it produced an error, saying tui interface was not available. Trying to connect to wifi networks with Ceni showed that the network interface was not detected, which means that the image comes without the required firmware. This is disappointing given that Vsido is not explicitly aimed at being free as in Libre-software and iwlwifi is a fairly standard package. It would have been easy to include this and support a wide variety of laptops with intel chips. Given this we have no choice but to connect per ethernet or other means and download the appropriate wifi driver like in standard Debian when using the official images. A real shame because with the inclusion of a few packages Vsido could have easily distinguished itself and provided a convenient way to get a basic Debian with a polished Fluxbox up and running if multimedia codecs and firmware packages could have been preinstalled and something like VLC provided.

Vsido already has the deb-multimedia repositories set up. At the time of writing there were 809 packages to upgrade the image as provided, which translated into 449 MB of packages to download. Not too bad for something nearly ten months old. But then this is a small sized system. SpaceFM mounts partitions easily to allow the user to manipulate files. This would also be a good rescue tool.

Ram usage was low as can be seen in the screenshots but quickly spiked to 1 GB when using  the Firefox browser and having opened a few applications. CPU usage was low around 1-2% on idle and quiet throughout, nothing out of the ordinary.

Naturally, in daily usage live from USB or installed this was blisteringly fast, no question.

This modification is a valiant attempt to provide something different, a starting point to track Debian Unstable from a minimal Fluxbox base. It probably serves its advanced user base well that I would assess it is intended for. This is not a project for newbies. Users should have a fair amount of expertise and knowledge of what is available, what they want to achieve with it and what to install on this base.
All the little issues can easily be fixed with a bit of experience and then you have a nice spin if Fluxbox floats your boat and an install that should be good for a good few years of rolling with Debian Sid.
Personally I would install this in a dual-boot setup and let the other OS manage the boot loader, or run two instances of Vsido in case something breaks during an upgrade.