FuryBSD is a relatively young project that is offering live systems using either KDE Plasma or the Xfce environment for the x86_64 architecture based on FreeBSD that can be installed from the desktop once booted up. This sounds quite appealing after having had good experiences with GhostBSD which is also based on FreeBSD and I was looking forward to check out a clean system using KDE.

Years ago I had tried the now discontinued PC-BSD with KDE but it seemed heavy and bloated. The website also looks lean, nice and professional, promising a "powerful, portable FreeBSD desktop" so expectations were up. Time to get the ISO. The last release is 12.1 and as indicated I opted to download the Plasma edition over Xfce. The file is 3.2 GB in size. If that is a problem or takes too long on a slow connection the Xfce edition comes in at a more manageable 1.6 GB. The file was then written to USB key. I tried both the 2020030701 release and the updated 2020042001 with similar results.

Booting up the FuryBSD live image we get a traditional black screen with Ascii style characters straight from the old days of computing. Such is the BSD heritage. There are a couple of options to boot into multi user (the default) or single user mode which allows us to go into text mode and also an option to abort. This is pretty much it. Unfortunately there is no way to start an installation from here so we'll have to boot into the desktop. Once we hit that option the boot sequence commences, predictably old style and without obfuscation. Lots of text scrolling by but that's ok with me. 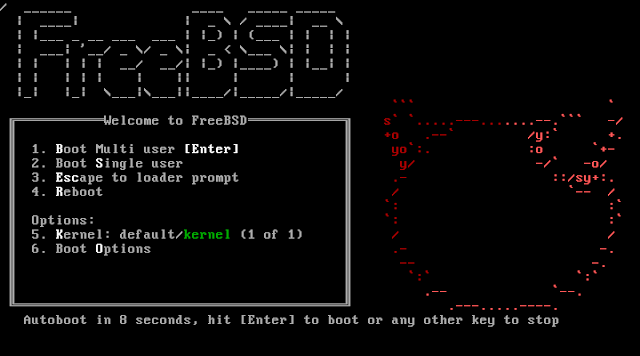 What is not ok is what became obvious soon, that it's just not working on any of my hardware. FuryBSD presented a stretched 800x600 desktop on a 1920x1080 screen on my ASUS Vivobook. There are shortcuts at the top of the screen to start the installer and reconfigure xorg display settings but as the touchpad didn't work there was no way to use the mouse. I was able to get around the KDE menu using the keyboard and confirm it's Plasma 5.18 and see that it gives us a standard  implementation with all the usual tools without the Calligra office suite but that doesn't really help.

Ok, one could work around that using an external mouse or try it in a virtual machine but that's besides the point. Every other Linux distribution so far and every BSD have managed this, although not necessarily all on the same laptop.
So I gave it another chance with a second try on the old Dell Latitude E4300 with intel graphics supported by the i915 driver. This time I got a garbled screen showing about 10 iterations of the Dell logo for some strange reason in the upper half and a white field stretching across the lower half after booting into the desktop, which then turned into a black, blank screen with a mouse pointer on top. The touchpad and track point worked though.

After this I've had enough and decided to leave Fury alone for the foreseeable future. I had gone into this trial with high hopes for an installable BSD live system that just works similar to GhostBSD but with Plasma and Xfce offerings. Unfortunately I didn't get to check out the installer and things like wifi support and multimedia, stability, resource usage and everything else one would usually test like availability of packages and adding software from ports vs. binaries. Judging by user reviews on Distrowatch many people are encountering problems.

Over the years I've been trying GhostBSD, a now defunct Live CD called Jibbed that at least booted into a fully functional desktop as advertised and had no problem with my touchpad, VirtualBSD, NomadBSD (run from USB) and now FuryBSD. All of them worked fine for their intended purpose but not all have an installer or were indeed intended to be installed at all. At the current time for a traditional install my favorite is probably GhostBSD. This worked very well in all settings, in live mode from USB stick, installed in Virtualbox and to hard drive. It is probably also the only choice among the BSD desktop spinoffs at the moment for a main system on disk.

Quite disappointing. Over and out.
Posted by barnabyh at 00:34