Rescuezilla 2.1: Caped Tux to the Rescue?

Rescuezilla, not to be confused with Rescatux which is based on Debian, "is a specialist Ubuntu-based distribution designed for system rescue tasks, including backups and system restoration."(1) It is a fork of Redo Backup and Recovery after that was abandoned and like its predecessor allows a bare-metal restore after any hardware failure directly from the live image. It works as a live CD/USB image and can be used to work with Linux, OS X and Windows, automatically searches a local area network for drives to backup to or restore from and can recover lost or deleted data files. Rescuezilla uses a basic LXDE as graphical desktop. So far the advertisement.

It exists for the 32-bit i386 and x86_64 architectures. The latest version is based on Ubuntu 20.10 "Groovy" which is now the main and only version on the download page and this one only seems to be available for 64-bit. At the end of last year the project also offered a version based on Ubuntu LTS "Focal Fossa". The image rescuezilla-2.1.3-64bit.groovy.iso is 885 MB. The project inherits its use of systemd from Ubuntu.

Basic System Requirements are described as having access to a PC with Intel or AMD CPU, at least 1GB RAM (2GB recommended), USB stick (faster the better, this stick will be completely erased to hold Rescuezilla itself), an external USB hard drive (with enough free space to hold your backup images).Backups created with Rescuezilla v2.0 and newer cannot be restored using prior versions of Rescuezilla. Backups created with older versions of Rescuezilla can still of course be restored with v2.1.3. From this description it appears to be mostly a beefed up version of Clonezilla. Not quite.

The process is then described as download, write image to USB, Reboot, Enjoy. This was easy enough, the image was written to a USB stick and booted up without problems. The first screen presents us with the opportunity to switch language to one of six supported and then to start Rescuezilla from the medium or copy to RAM first. We can also check the image for errors while it was copied and perform a memory test. Pretty standard stuff so far. The system is dropping us in super user mode. 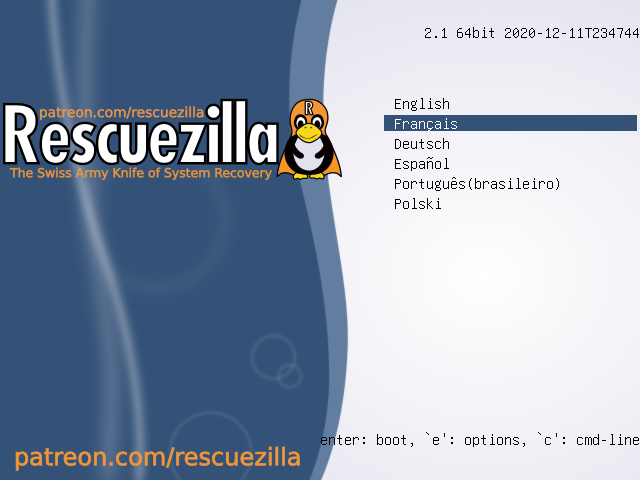 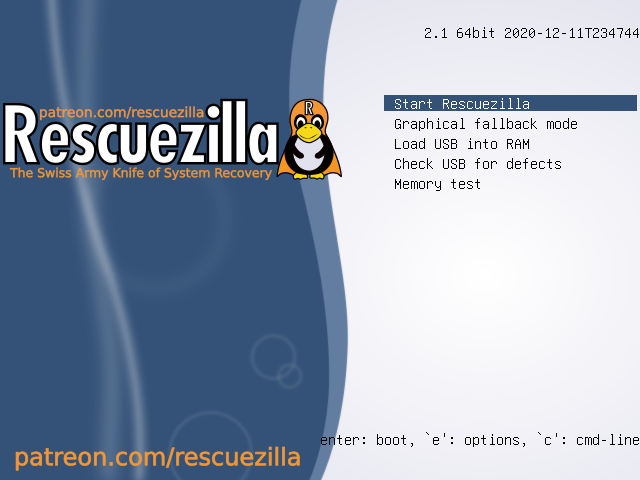 I had a very specific reason to download and try this so I'll stick to my case and what I had wanted a rescue tool for, which was to restore Grub2 to the MBR of my hard drive after it got wiped by some distro hopping.

And once it is logged in the tools available from the desktop are a bit underwhelming. The main screen shows the backup and recovery option straight away and it is clear this is the main purpose of the live image as this window is actually called Rescuezilla. As visible in the screenshot the 'Image Explorer' entry to easily mount Partclone images and extract files has been newly added and is still in beta.

At the bottom we get LXpanel with a menu on the left and the volume, network indicator, battery and clock/calendar applets on the right.

A couple of standard file tools of the LXDE desktop are accessible from the menu: the PCMan file manager, an image viewer, Mousepad and the LX Terminal. There's also Network Manager, Disk Usage Analyzer and ARandR to change resolution. Only a couple of actual rescue tools are included and accessible from the menu, i.e. Testdisk for file recovery in the terminal and Photorec from CGSecurity, labelled Photograph deep scan. Both these tools work well as I have tested and used them before in a real life scenario and they do recognize and recover lost and deleted data. But these are the only actual rescue tools included and one can just as well add them to any existing hard drive install which would be enough if dual-booting. However, if the entire disk has gone bad and unbootable Rescuezilla would make sense.

The LSHW hardware lister, GNOME Disk, Gparted and Firefox are also included. This rounds off the meagre selection. Somehow I had expected more of an image this size calling itself a rescue distribution. There is no installer but the running system can be upgraded with apt or apt-get.

In the end a way to restore and reinstall Grub2, arguably one of the more frequent if basic rescue tasks needed to perform these days, was not provided. For an image the size of 800-900 MB there isn't really a lot on board and I ended up restoring my Grub2 with a live copy of Linux Mint 20.1 'Ulysses'.

There are really only three tools to be run that are obvious from the menu:

- the Rescuezilla hard drive and partition backup and restore utility

One might also do just as well with a copy of Puppy Linux or Porteus depending on the tools required and there'll be less to download. In hindsight Super Grub2 Disk would have been enough as I found out but it would be nice to have all this in one package. Including the option to restore a boot loader wouldn't exactly bloat it up much more.

If one needs exactly this combination for the very limited use case of disk backup and recovery, then Rescuezilla offers this package pre-installed. There are other rescue distributions though that are doing this and more, for instance Clonezilla or Rescatux might be just as suitable instead. I struggle why I should recommend Rescuezilla over other solutions - in the end it comes down to specific need and user preferences.

(1) Description lifted from the web page entry on Distrowatch.