According to the Distrowatch summary "Rescatux is a Debian-based GNU/Linux live distribution that includes a graphical wizard for rescuing broken GNU/Linux installations." It features a graphical interface where one can choose a task to perform, including the option to restore the GRUB bootloader, Linux and Windows password resets, and Linux file system checks. Being based on Debian (Stable) it is using the Linux kernel 4.19.0-8 and systemd in the background. Right off the bat this could be a problem for machines needing a newer kernel but it was ok for my hardware, the newest machine now being around 20 months old.

Rescatux booted into UEFI mode on this Asus Vivobook 8th Gen Core i7. The iwlwifi firmware was missing and as such I was unable to get online in the live session.

At start up the initial boot screen is already very informative, letting us know a number of options and the version numbers of system tools. 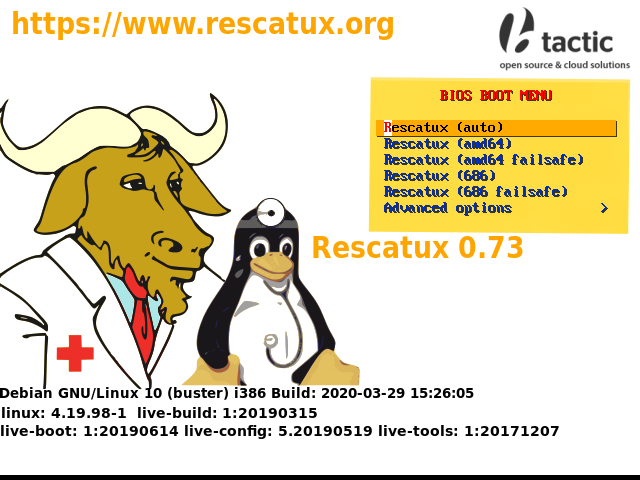 The most interesting option would be that we can choose to boot the rescue mode in 64 or in 32-bit for the 686 instruction set so there's no need to download two ISOs if you're in a mixed environment with some older machines of the i686 architecture. No need for techies or even the well-equipped home user with a whole lab of machines to carry around two USB sticks, one image is all you need. The whole hybrid rescatux-0.73.iso is 691 MB in size.

Under Advanced we find a hardware detection tool and the almost obligatory memtest.

It's all very clear so far, let's bring in the doctor.

When we hit the button boot up messages scroll by and drop us straight into an LXQT desktop with the Rescatux-Startup-Wizard opening. If you want to change default setting select No at the initial question and we can select a different monitor resolution, change language/locale, keyboard layout (separately), add additional keyboard layouts and set a key toggle to switch between them and keep a VNC server running.

Rescapp then performs a self-test before it starts which shows that it supports UEFI boot and SE Linux. Then the main Rescapp application window opens. There are a couple of entries at the top to open Hexchat and join the support channel, share the log and read some documentation under help, basically a very short HTML manual. It also points us to the possibility to run Rescapp on a non-free base but there is no non-free version of Rescatux because developers feel this is not ethical. This means nothing else than downloading a Debian non-free live image and adding Rescapp on top. It's nice to know the project is making their main application available to all, the only drawback being that if installed this way it will not support SE Linux. 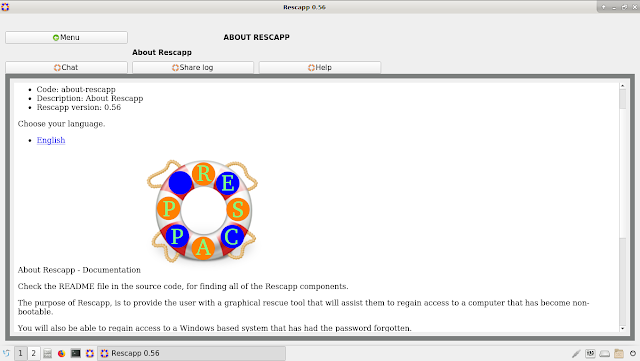 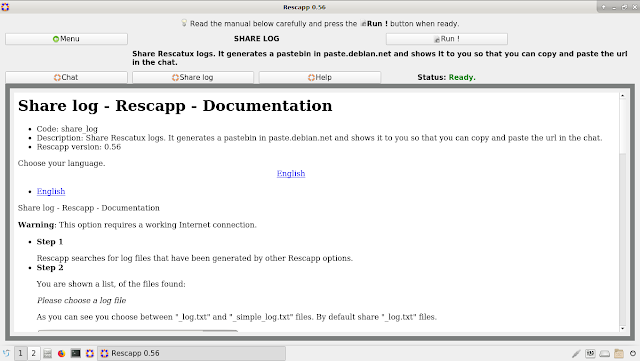 A couple more applications are included like the Featherpad text editor, the QT version of PCMan file manager, archiving and screenshot tools and the LXimage viewer, the QTerminal, Synaptic for adding anything missing needed to perform the job, Firefox and Connman for managing network connections. Gparted is also installed. But the real purpose of this system is the Rescapp wizard slash control center from where we can perform specific tasks with the push of a button. 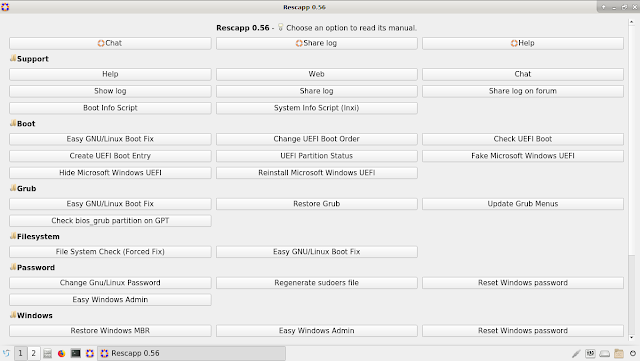 From here we can fix the boot record in Linux; restore Grub and update the menu; create UEFI boot entries or change the boot order; check UEFI status; manipulate or fake Microsoft Windows UEFI entries; check file systems; work with Linux and Windows passwords by changing or resetting them; Restore the Windows MBR; promote the user of an existing Windows installation to Admin; work with the GPT. One can also access Gparted from within this panel and start Photorec and Testdisk for data recovery jobs. Both tools start in a UXterm and as I have previously discovered work well but like many they are not unique to Rescatux but can be added to any distribution from their respective repositories. 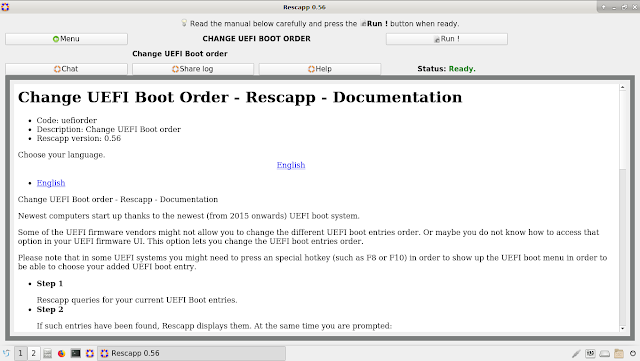 A little handholding is provided when selecting a task in any window that opens.

I should perhaps add that if the main reason is to reinstall Grub and restore and work with boot loader entries then Super Grub2 Disk would be sufficient - which is a much smaller download at around 14 MB or 26 MB for the hybrid image. Super Grub Disk is part of the same project as Rescatux.

There's a lot of help on the website so I'll also go into this a little. The tabs at the top let us make a donation, jump straight to either one of the two utilities and go to the download page. Both are filled with a large amount of information on how to use the tool and get newbies started. Checksums are provided as well as a matrix what platforms it will work on - think Secure Boot v BIOS and the various architectures.

These pages are full of screenshots and videos how to accomplish things 'hands-on', also what's new and known bugs. Under Help we find How-To's and quick and dirty if one just wants to get things done fast, alos links to wiki, forum and mailing lists.

Under Other there is a link how to add the package repository to an existing Debian or Ubuntu installation to install rescapp into it. Furthermore we get links to the development pages with bug reporting and to the two Twitter accounts.

The approach to the web pages is quite utilitarian. It's not the prettiest and decidedly 'old-style' but conveys a lot of information rather quickly and succinctly without feeling overfraught. Overall the pages convey all the necessary information to become a competent user of the tool, a good mix of textual overviews, bullet pointed synopses, screenshots and embedded videos.

When comparing to another distribution like Rescuezilla that I looked at a few days ago then at the smaller size of 691 MB you get a lot more bang for your buck with Rescatux. It presents us with a lot more choices what to do and how to set up our rescue system in the beginning.

However, this isn't exactly a fair comparison. Although they share some utilities, namely Gparted, Photorec and Testdisk, Rescuezilla's main feature is disk imaging for backup, restoration and file extraction whereas Rescatux mainly allows us to work with boot records, partition layouts and reset passwords in Windows and in Linux. In this sense they both have a place and rather complement each other. Just be sure to pick the right one for the task.